The mole poblano is, from my point of view, the best Mexican dish, absolutely and incontestably.

Another mole could do the competition, if it were the case, like mole oaxaqueño, green, the little yellow, the yellow, the pipian, the black stuffing, and I leave the list here because I'm starting to drool. Also, this post would become even longer than the 100 Mexican dishes that you have to try before you die, simply because there are dozens or hundreds of types of mole in Mexico.

The mole poblano is what the foreigners innocently call the chocolate sauce. For those most interested in the history and the details, I leave here the Wikipedia link, and also this one.

It is true that the moles come from prehispanic and colonial origin, but some ingredients and methods of preparation have changed. I assume that the taste also (although I do not know, because I'm very young).

The truth is that there is no better recipe for mole than the grannies do, the more traditional the better, and that's absolutely irreplaceable by the paste of mole that is obtained in supermarkets and stores. That is why, although it is not the fastest Mexican dish to prepare, today we are going to cook the mole poblano recipe from Comedera.com 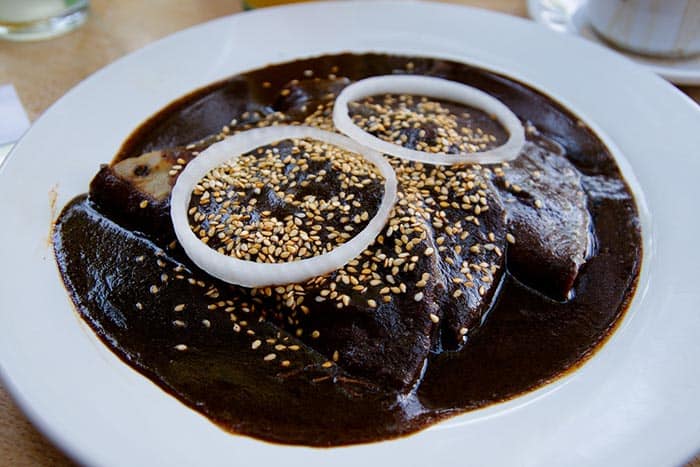 How to make poblano mole

Several types of chile are used to prepare mole poblano.Learn how to do it step by step at home.After cooking, you have to reserve this broth.

The ideal accompaniment to a dish of mole poblano is white rice, like the recipe from Comedera.com: How to make rice.

If you are a fan of Mexican food, I invite you to try some of these recipes: